Come and enjoy an amazing night of lyrical storytelling in a way you’ve never experienced before. With a lineup of 7 artist giving their own spin on the theme of the Cathedral of Thorns, ‘an ode to the free spirit.’

‘Carrying Narratives’ is a collective of writers who aims to revive the literary scene in Curacao. They organize writing sessions, in which writers come together, write, and give each other feedback and all of this while stepping outside of their comfort zone. Open mic nights are also organized at Blue Mall Curacao to give writers the opportunity to share their work with the public. “In creating a community we can all grow and create more opportunities for one another”. The Cathedral of Thorns is offering you a unique experience of these word artists. 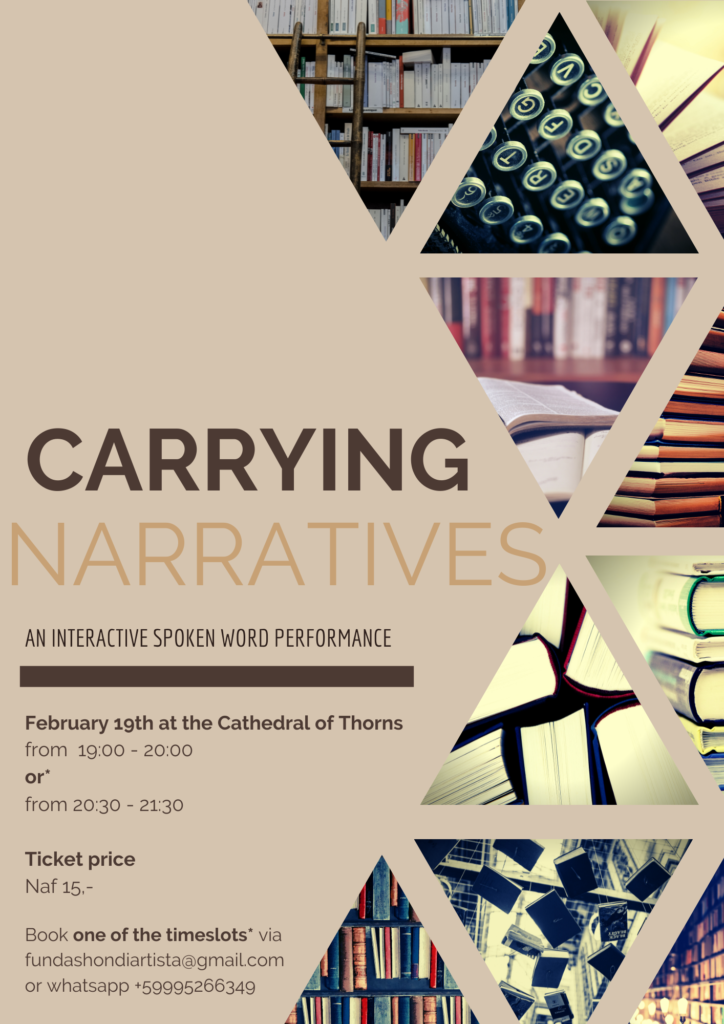 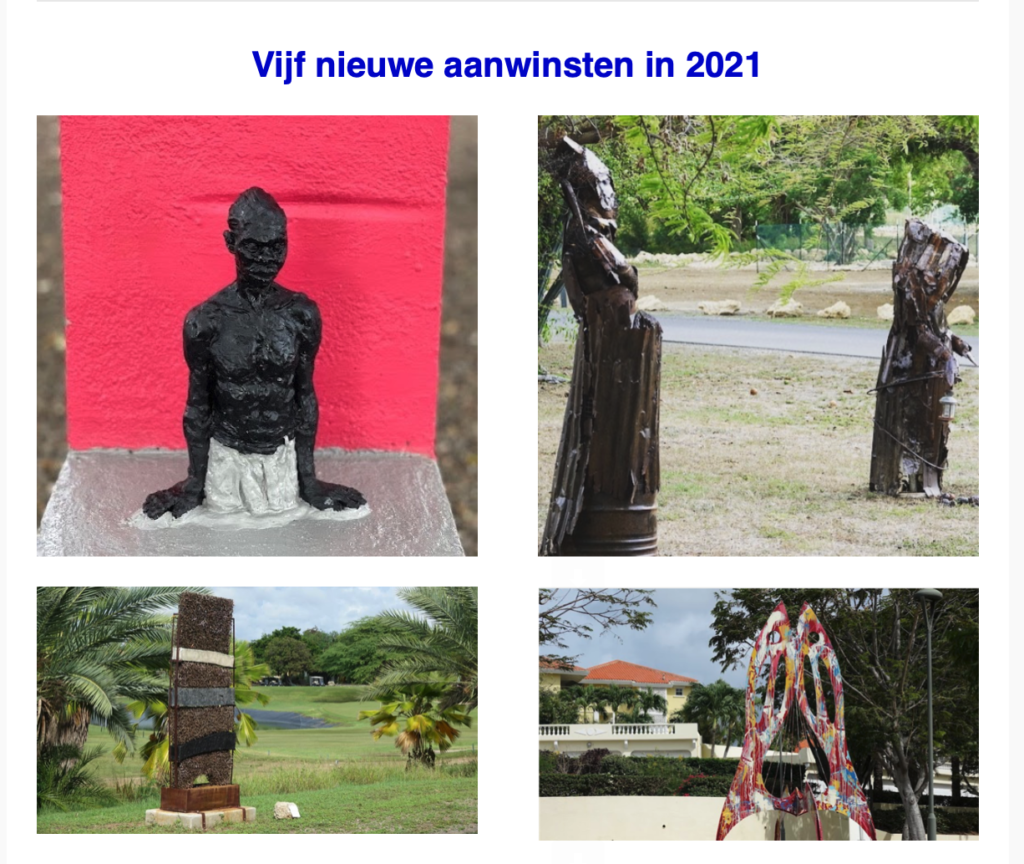 Cathedral of Thorns by Night

Presale tickets are available at The Zumpiña Shop (on the premises of Landhuis Bloemhof) & at Landhuis Bloemhof during the day (9 am – 12 pm) or at fundashondiartista@gmail.com / app: +59995266349
Ticket sale at the door September 3, at The Zumpiña Shop from 7 pm.
Entrance September 3, from 7 pm. Santa Rosaweg #10 (Number TEN)
The Cathedral of Thorns by Night, has been made possible by Het Prins Bernhard Cultuurfonds Caribisch Gebied

Santu Kabritu di spiritu di sumpiña is an ode to the goat. The goat eats the leaves from the branches of the wabi, a work that is almost impossible for man to do. Doing so, the goat helps to realize the Cathedral of Thorns. The artist, nature and the animal work together and are connected with each other.

In many cultures the goat is a sacrificial animal and represents fertility, vitality and a strong connection with the force of life. In ancient Greek religion, Pan, the Greek god is depicted as half man half goat, and by the Christian as the devil.

The color blue stands for holy and is found in various religions such as the holy virgin Mary and the evil eye. The color blue also refers to the pigment of the indigo plant, which was shipped from Curaçao to the Netherlands as an export product during colonial times. It was the most sought after color and stands for royalty. The golden crown of thorns with cotton represents sharpness and tenderness

The goat is the main thread and symbolizes the power behind the Cathedral of Thorns masterpiece. 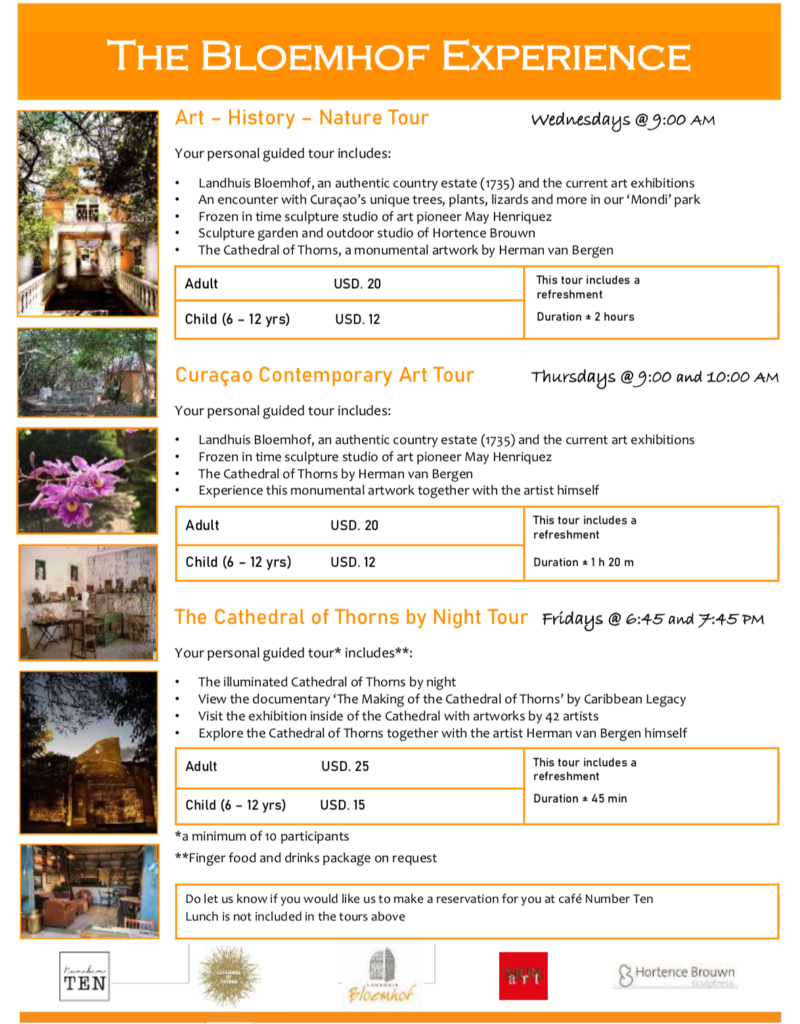 After a sold out concert on June 12 with Banda Krioyo Nobo we had to close down for a while due to COVID-19 regulations. The planned performance on June 26 of he Yumarya Grijt & Friends was postponed to July 10. What a blast this performance was!

We are so happy to be able to show you the beauty of the Cathedral of Thorns again and continue with our series: Music & Art Heal All Wounds.

So, we are happy to announce the 3rd concert of this series: Típiko Dulce Esperanza will perform on July 24 at 7.30 pm. Please check our agenda for details.

Friends of the Cathedral,
Art & Music heal all wounds
Stay tuned for more information…
From next week 12th of June we will start organizing small-scale music performances with a limited audience. Little by little we hope to welcome you all back to the Cathedral.
Banda Krioyo Nobo,  Arjen de Graaf violin, Vernon Chatlein percussion, Enrico Henriques, piano
We hope that everyone is doing well and that you are safe and healthy. The Corona crisis has seized the world, and no one could have imagined the enormous consequences it would have for all of us.
The Labyrinth Cathedral of Thorns is not just another community project. It is an achievement of unprecedented scope, a manifestation of the good in humanity, an Ode to the Free Spirit. COVID-19 suddenly disrupted everything and we almost saw all our hard work of eight years go up in smoke.
But we won’t give up that easily! During the past few weeks of lockdown, the predominant feeling was the desire to carry on as soon as possible and start shaping our ‘new normal’. Now that we are out of lockdown, with your support we can slowly begin doing that. Nobody knows what the future holds, but we only have one choice here and that is to go on! We can’t let this project fail, especially now. Because the world so desperately needs this hope and perspective.
Or call Daisy + 5999 526 63 49

I was officially celebrated, honored, inaugurated, all my sumpinas in a row, adored, beloved, admired. And after the great opening, which felt my prickly fingers reach out to artists, performers and musicians, the magic kept on coming. No longer am I merely the backdrop for nice pictures, a décor for humans doing what humans do. No, I sang! And the whole month of February, I was filled with musical vibrations, high frequency performances, of the dark and the light. I saw humans losing themselves in my labyrinth, and finding themselves in eachothers’ arms. It’s a great gift, to see the world from my perspective.

February was a peak month for me. I don’t often address you directly, as an entity, and many of you may not be aware that I have a life and consciousness of my own. But, yes, as the Cathedral of Thorns, I am my own being, with my own unique perspective.

As February changes into March, my creator Artist, who many of you know as Herman, and his partner in crime, you call her Daisy, keep the fire burining. The Work continues, so I can reach ever higher, my arms ever stronger, like the sumpiña filled wings of the Angel rising up to my third eye during the Inauguration. I hope to see you again, I hope you’ll keep coming to me, supporting the Work.

Together with underprivileged young people and local artists, the inspired Dutch artist Herman van Bergen is building a labyrinth with walls of thorns on the island of Curaçao. It will be officially opened on 2 February 2020, but tens of thousands of people have already visited the Cathedral of Doornen during its construction, including Princess Laurentien, actor Jeroen Krabbe, singer Barry Hay and artist Rob Scholte.